Wall Street brokerages expect Provident Financial Holdings, Inc. (NASDAQ:PROV) to announce $11.05 million in sales for the current fiscal quarter, according to Zacks. Two analysts have provided estimates for Provident Financial’s earnings, with estimates ranging from $11.00 million to $11.10 million. Provident Financial posted sales of $12.66 million in the same quarter last year, which suggests a negative year-over-year growth rate of 12.7%. The company is expected to issue its next quarterly earnings report on Monday, May 4th.

Provident Financial (NASDAQ:PROV) last issued its earnings results on Monday, January 27th. The financial services provider reported $0.31 EPS for the quarter, missing the Thomson Reuters’ consensus estimate of $0.34 by ($0.03). The firm had revenue of $10.98 million during the quarter, compared to analyst estimates of $11.10 million. Provident Financial had a net margin of 10.97% and a return on equity of 4.59%.

PROV has been the subject of a number of analyst reports. Piper Sandler initiated coverage on Provident Financial in a research note on Tuesday, February 11th. They set a “neutral” rating and a $23.00 price target for the company. Janney Montgomery Scott upgraded Provident Financial from a “neutral” rating to a “buy” rating and set a $24.50 price target for the company in a research note on Wednesday, January 29th.

The firm also recently announced a quarterly dividend, which was paid on Tuesday, March 10th. Stockholders of record on Tuesday, February 18th were paid a $0.14 dividend. The ex-dividend date was Friday, February 14th. This represents a $0.56 dividend on an annualized basis and a dividend yield of 3.95%. Provident Financial’s payout ratio is presently 96.55%. 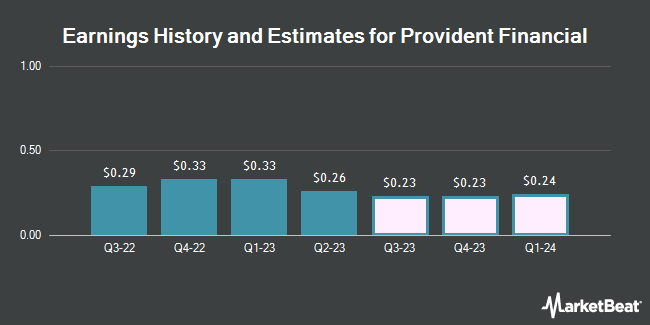 Bank of America Corp Short Interest Up 18.4% in March

Complete the form below to receive the latest headlines and analysts' recommendations for Provident Financial with our free daily email newsletter: